Thinking the Gift of Death 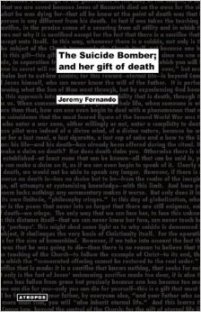 Jeremy Fernando’s book, The Suicide Bomber; and her gift of death (2010), challenges all the usual assumptions about, and approaches to, the suicide bomber’s act and to what is at stake in it. Rather than simply dismissing it as “evil,” he tries to think through the call and response of the bomber’s death. Fernando refuses to write her off, and instead writes through her and her act, indeed, writes it/her himself. For the book is not only concerned with her act, but with the similarities between her act and his own: the act of thinking and of writing a book.

Fernando tells us, in a section set apart from the main chapters (as indicated by a different tone and font), “Confessions: a suicide note,” that the reasons behind his study are profoundly personal (185 ff.). He makes it clear that he has not forgotten the fact that people die because of the suicide bomber’s acts, and he takes full responsibility for “defending” her. But his reasons for doing so are clear: he wants to place, “thinking and the suicide bomber– next to each other,” because for him both are (nearly unthinkable) “events,” and both involve our “relationship” to death. Therefore both are irreducible and remain forever enigmatic. They are both impossible to describe, impossible to trace back to “causes,” impossible even to experience, and so impossible to “know about.” In both, what is at stake is a trauma that simply will not give us any good answers. Furthermore, both involve a relation to the other, or to otherness as such, which precedes the subject and her account: a relationality that no “code” or “Law” will ever decipher or exhaust. Both involve a form of communication, a “symbolic exchange,” which is “profitless,” which has nothing to do with information, motives, trades, reason, or logic, but rather with the “impossible”: the gift of death. This gift cannot be recounted, remembered, or inscribed; it can only challenge us. And so we can only try to respond, knowing that no response will ever be adequate.

It is this contiguity that Fernando explores, and he does so by keeping abreast of every attempt to explain away or to forget this traumatic core. He will not distance himself from her and her (his) death, and instead tries to think through, and write, the question, the possible question, of death, that the suicide bomber’s act poses for us– a question posed at the heart of every finite existence. But in doing so, he still wants to think a “non-terroristic” thinking, and his prose affirms this, for he is nothing if not delicate with his “subject matter.” For the suicide bomber not only haunts him; he shares something with her. Her death implicates him somehow, implicates him in his own, and The Suicide Bomber is an attempt to think through this implication, an attempt to think through death.

The only way to honor such a bold and careful book is to offer my “critique.” However, I don’t want to suggest that Fernando’s study is lacking in any way, only that its method and frame– above all, the caution he exercises in not “dismissing” the suicide bomber’s act in any way, the lengths to which he goes in identifying her act and his thinking as far as thought can bear– prevent him from articulating the differences between her act and his in an explicit way. Again, this is not a fault of the study; it is precisely what his book gives us to think. I will spend the rest of my review trying to articulate these differences, based on the very insights Fernando gives us, in an attempt to make explicit what I find implicit in his findings.

Towards the end of the book, we’re told how, in Greek mythology, man was challenged by the Gods, but that even though he was capable of besting them, he always had to lose this challenge. What mattered, then, was not the result, but man’s recognition of the challenge as such– of how one has to “play along,” even though one was bound to lose. “The difference lies not in the result, but in the response,” Fernando explains (248). I think we can interpret this difference as a cipher for the difference between the suicide bomber and the thinker-writer. Both are called by death, and both die; what differentiates them is how they recognize this call, how they respond to the possibility of death and to the challenge death poses.

Everything therefore comes down to how one is, “open to the encounter of death, to potentially encountering death” (161). But when we’re told on the following page that, “There is nothing to (her) death except attending to the possibility of death,” I have to raise an objection. Contrary to the entire ethics that Fernando, the thinker, advances, the suicide bomber does not wait on this possibility. No, she forces it. She eliminates it as a possibility shared with others. She makes it “actual,” removing all of its “potential,” while also annihilating actual others and their “potential.” The suicide bomber robs the other of his death, for she takes away his time to wait for it, his time to recognize and respond.

As Fernando tells us at the beginning of the book: “it is the a priori exclusion– the denial of possibilities– that is problematic; that is terroristic,” and “It is this ‘yet to come’– the possibility of the not yet, the to be, the maybe– that terror attempts to halt, to cease, to seize” (65, 63). Following the aversion held throughout the book to “certainty,” comfort, and assurances of every sort– which is so often found in the false understanding of the ‘theorist’–, we might say that the terrorist’s passage à l’acte produces death as certainty, answer, and comfort, thus paradoxically destroying death as an uncomfortable possibility in the name of its “actual” realization (33). She destroys death’s nagging question, ends her chance to remain in waiting and responsibility; and she also keeps others from the same, seizing their ‘to be’ and denying it forever.

“Death ought never to be understood as the real event that affects a subject or a body, but as a form in which the determinacy of the subject and of value is lost,” as Baudrillard writes and Fernando cites; and it is precisely this, that death is a “form” signalling the loss of determinacy and value, that the suicide bomber misses (99). Her response cuts short her “unceasing obligation to respond and respond in spades” (89). She does not realize that “death has to come to you”; she tries to do the impossible and give death to herself (247). And so while we can accept that her “gift” remains an enigma to us, that it should not be “flattened,” “reproduced,” or “returned,” we cannot say that it is a “gift to come.” Or rather, her gift is “to come” only insofar as we think it, as Fernando does; but for her and those she kills, everything is finished, nothing more comes, not even death.

The thinker-writer, no less traumatized, leaves open death’s possibility and dwells in indeterminacy, letting it upturn and reverse all his “values.” He gives the gift of death by effacing and exposing himself, “establishing a relationality with another,” and with all the risk this entails (212, 214). Rather than offending us with death and (in most cases) preventing us from thinking about it, like the bomber, he poses an authentic challenge, obliging us to respond with our own life, with our own thinking. Through his testimony, he challenges us to expose ourselves likewise. He occupies the “form” of death, existing and expressing himself as an “‘I’ that is in alterity with itself; a self that is other to itself,” for, “it is in this position of being other to one’s self that we might find some hope” (213).

With this in mind, we cannot help but affirm that the bomber’s act is hopeless: she is not other than herself and cannot be. She maintains no distance from herself, for in blowing herself to pieces she caves in on herself, becomes a collapsed, inert point. She performs her ‘I don’t know,’ but she can’t speak about it or make sense of it. Paradoxically, she eliminates the risk of death by dying; whereas the writer-thinker (who shares her result) performs his ‘I don’t know’ by speaking it– by attending to death and waiting on it, by bearing witness to his wait, by acknowledging how death is “always already a part of one’s life” (248). And so while the suicide bomber imposes herself on others– indeed becomes the imposition par excellence: the imposition of death–, the thinker, waiting, witnessing, exposes himself in his thinking and his writing, and so shares with all this exposition: his death, his possibility, his reversibility and indeterminacy– his gift.

In conclusion, we must admit that the suicide bomber, even if her act exceeds all reason and understanding, does know the effects of her sacrifice, just as the Kamikaze pilot knew the effects of his: someone is going to die (cf. 138). At the very least, in slamming my plane into that ship, in strapping these bombs to my chest, I kill my possibility, I kill my death. And even if I do not kill anyone else, I kill the encounter with the other, I kill my chance to be exposed to them. I kill my chance at poetry. I kill the other in me by giving him no chance to die. In forcing the issue, his issue, my issue, I close it, killing the chance that he is, that I am. Every suicide is a murder.

It was only by showing the proximity between the suicide bomber and the thinker that we were able to show what separates them. It’s always a matter of those others, that otherness and those possibilities, that Fernando himself never forgets, but that the suicide bomber always fails to acknowledge and address. As thinkers-writers, we follow him in attending to the possibility of dying without forcing it, without absorbing the other (or our own self-otherness) in a suicide act. We do not take the impossible from others, we do not try to experience it for them; we leave them to it, and stay with our own ourselves, opening ourselves to the impossible and bearing witness to it, and so offering the possibility of a shared encounter– with death, the other, ourselves.

As Georges Bataille once wrote, it’s not a matter of granting a “greater share to loss, but a more conscious one.” Not more death– no suicide, no sacrifice, no bombings– but more attention, more disarmament, more effacement, more gifts. Thanks to Jeremy’s gift, this task of granting more consciousness to loss is, while not easier, more possible— and for that, finally, I can only extend my own thinking, my own gift of death, in thanks.

1 Response to Thinking the Gift of Death