There is no image [Bild] of deconstruction, no more than there’s a unity or a “one” to it.

Deconstruction is the impossible: that which arrives to us, but without arriving, that which is only ‘there’ in arriving, which cannot have taken place yet, however tied to the immemorial it is or seems. And so is justice: the future without prevision, previsibility, or foresight. Differance like the beat of time, of the present absent with itself, of thinking death, a work of mourning, anxious gladness, writing. But the question is alive in that joy also, the joy of listening, of being in what is coming: where we are situated with respect to it [ce qui arrive comme impossible], with the other that comes, inside and out. What will it have us say?

A side cannot be chosen, but the division (inside-outside, me-other) is still there. It is the hit and resonance, the wall crumbling while moving elsewhere, while we also move elsewhere along the wall. Le phantôm du mur est toujours là. The ghost of the wall is always there. “Berlin is the temple of this metaphor.” (Vive le phantôm, wrote Derrida, long live ghosts.)

Deconstruction in der Welt, the Raum of Literature. Think only of Albertine disparue by Marcel Proust; he writes that he dies then (emphasis) when Albertine disappears, but he writes this in the “I.” Who is it—Proust, the narrator, Cixous, you, me? When did “she” disappear—was she still on stage, could I still hear her? When was the world I shared with her gained, when lost? And how often? What slips away in the instant is the truth we share, I with her and she with I, we with us, on a path of infinite flight away and towards, neither and both; I only share it in the instant, when it comes. (Love: the melody of memory put down.)

(Later, Cixous speaks touchingly about her mother (I understood neither her French nor the translated German through this part: my account relies on the account of friends), her mother who had said, “all writers die young,” and that she was the only one left. She and her daughter, Helene, exchanged letters until she was 101, and she lived to be 104.)

If we ask about death, it’s about the impossible: you can’t wait for it, you can only wait for it, it never comes. Though we think we see it happen to others, we never see it; either that, or it only ever happens to others, including myself, which means I never get to see what would be most proper to me. But this “we never see it” is right there on the face, like the visibility of the invisible, the “exposition of a soul.” “We never see it”: not the words either, not even these glances we exchange.

It’s a question of what comes in not coming [ankommt was nicht kommen an]. We still exchange glances, their letters, ours. Deconstruction as a factor for undoing or un-ordering: of welcoming disturbance, estrangement [dérange bienvenue]. —A prior(i) hospitality, where the other [autrui] is anterior to me, incessantly antagonistic to the relation I entertain with “myself” (another call from Levinas): inseparable from the question of language and relation, right there in movement, it is “as” energy—as a welcoming of what can never be seen before it comes—as passion.

Deconstruction, simply: the other who speaks in me [l’autre qui parle en moi]. Come, then, let him speak.

After the event, I found myself (where “spaced” I had wandered) in line for her to sign books. As I didn’t have one of hers with me, I showed her a passage from Nancy’s newest, L’Autre Portrait, which I had just discovered that afternoon: une mêmeté essentielle de ce autre que je reconnais comme “lui-même” [an essential sameness of this other I recognize as “himself”]. She read it and asked, “You want me to sign Nancy’s book?” Pressed, no doubt—was this the moment to defend love? the same love she’d just proved to me?—I said, “We are only absences… we only have absences to say and share with each other… so…”

What could I say about our departure, when the meeting had already been that? She looked at me and I looked at her. I was grateful, she smiled, nodded perhaps. For a flash, it seemed like I saw her, the face of another. A face on fire, eyes deep as a trinity. A look of graciousness, hope, and forgiveness. The face of a thinker, of a saint, and to her, what else, a writer.

Waiting for the U, I remembered to look. She’d dedicated it: “une autre, Hélène Cixous.”

Either she or some fellow sitting a row or two behind me said: ich kenne mich nicht: I don’t know myself.

My hospitality to the other in me is hostile (“I resist change,” I don’t listen to myself), but I can’t decide if that other is inside or out, or whether I myself am outside or in. I can’t, must not figure out: who welcomes whom? And yet not only must I welcome. The welcome shapes my own figure, my own life, my own text. I was welcomed before I could.

We are the surprise of each other in the welcome, the surprise of self caught in common with all then, lacking all “properness” and place. We are together the derangement. Et elle fait toujours autre chose que le même. Nicht mit Absicht philosophische. Wir wissen nicht was das Ich ist. Aber: l’idée de ma mort m’oblige à penser à l’identité de moi. [And it is always something other than the Same. Without philosophical intention. We don’t know what the I is. And yet: the idea of my death makes me think about the identity of me.]

To imagine the worst, one must see it, find it in oneself. The mission of the theater is to portray this worse (“portrait” it?), without making a character out of the criminal. To show the worse in the everyman, the every-me, in every discourse: derangement.

The theater takes place in a hole in the wall, and the wall is there. L’étrange in mir nous étrange.

Hélène said: spiritual practice [Übung]: accepter de déranger [accept and take on the derangement]. Respect what has not come yet, beyond whatever evidence never comes.

No, it is not natural, it is not proper to anyone. It can in no way be said to have begun, because it’s what we always start with: a look, at ourselves, at another.

Life’s thought in a death’s sentence, shredded by the distance that renders it, while we share it: infinite passion. 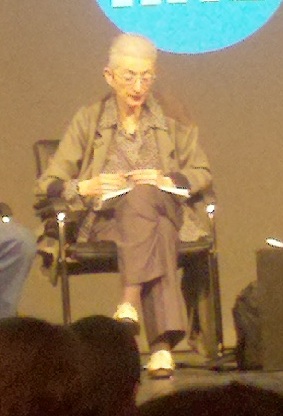