We are often inclined to believe that works which express the most profound ideas are those which will last the longest. But who judges the general profundity, and how is it determined? For to judge the profundity of an idea implies, at least, that the work has in some way been understood. Only from this basis of can we judge a work’s profundity and evaluate how it will stand the test of time. But does man* really cherish most that which he best understands, and can then judge? Or is there something else which holds our attention first?

If we look into what holds and has held man’s attention over the centuries, I believe we will find a different criteria, more encompassing and mysterious than understanding. This more “primordial” criteria was once taught to us through religion, and then by art. This criteria is to be found, I believe, in the education of our deepest feelings. What lasts is what teaches us to feel. It is also, therefore, that which is most open, itself, to feeling. What lasts is that which is most open to being touched. That which is most vulnerable, remains.

We may ask, to whom does art speak today? One will say that art speaks only to artists, that to understand what is at stake in “art” is necessarily to become an artist. But what, then, is an “artist”? And what do they have to do with “us,” now that we are at the ends of art?

We can illuminate the matter by juxtaposing the artist with the priest. Priests are set apart from the generic community of humanity, but are obliged to serve their particular grouping of humans. They are presumed to understand something of the divine that we, the public, do not; their work is to bring the “living God” into our midst. If we continue to esteem priests as priests, it is because we entrust them with this special relationship to God, which we do not feel ourselves capable of – because unless he maintains his status as “mediator,” the priest, and the church along with him, has no meaning at all. If I can communicate with God just as well, the priest is like a crosswalk attendant at an intersection without traffic, or one with automated lights that tell me all I need to know. As he stands there, stuck to the cement, pretending to function (to shepherd), I can simply go on ahead, guiltless, without any need of  his direction and better off to be alone.

And this is how it stands for the artist. Because there simply cannot be any intermediary between him and his art, let alone between him and his God or between him and his deepest feelings; because his “art” springs from the depth of his being, from the depths of his deepest feelings, intuitions, and thoughts; because every one of his feelings is singular and because his whole feeling-experience is even infinitely more singular, the artist knows he must forge ahead into his own idiom. That is, he cannot rely on anything being given beforehand: he must create the medium of his own feeling, out of that very feeling. As Charles Olsen put it, for man the instrument of discovery is the same thing as the instrument of invention.

The art which the artist creates, is he – educated in feeling by the whole spread of that life. The artist does not isolate himself from the world, but is totally absorbed in it. He does not serve a special community of followers, or a special doctrine of truth. Nor does he serve art. On the contrary, if he serves anything, he serves each individual, and each individual as an individual being. Even more, he serves each individual feeling. He serves, and serves up, only singularities. The artist makes room for each: every feeling, every being is “absolute.” And so if he speaks, he does not speak in general, but to heart and soul, where feelings are growing and ripening up. He speaks from his own absolute to the absolute he recognizes in you; and this relation-between-us is also each-time-absolute, singular, deep.

The artist must therefore face up to the distances which separate him and his feelings from other beings and those other beings’ feelings. He cannot communicate anything outside the artistic iteration of life which he is, in all its inaccessibility and impenetrability. The work of art strives to be an “equivalent” of that life, that feeling, to be “naked.” Because the artist does not communicate what he understands about himself or what he thinks about this or that, but himself. In his art, he exposes and shares the truth of his being-alongside-all-the-others. He exposes the whole of his love in his work, and in that he is totally unsheltered. But in order for this to work, the work must also have done something to him. As much as the work will one day strive to teach deep feeling, it is through its creation that the artist himself is created and learns to feel. It reveals to him the fullest extent of his love, and it is created in that full exposure. As much as it shines with the truth of his being, he remains in the dark about it. Only in the total work can one perceive the “full extent,” because the total work always reaches back into the truth that can’t be seen – the truth of being revealed only in the present of participation, the present feeling of life being shared.

So we can see how the learning, sharing, and inspiration that takes place between artists is nothing like that between priests. The latter strive towards a unity of understanding, whereas artists strives towards plurality. They move against each other, exhaust their differences. Where a priest flattens them out, an artist cultivates nuances – the essence of feeling and of artistic distinction. A priest may harp on about “mystery,” but all real uncertainty unsettles him; to a certain extent, he is terrified of being alone with himself and responsible for his own total education in feeling. Whereas an artist thrives off of it, the real unknown – themselves, their experience, their world – not a fabricated one named Chaos or God. And while a priest must feign to direct the lives of others, artists leave us to ourselves. No matter how much a work strives, or even succeeds, to educate us in deep feelings, it knows that at the same time its own ethical response in the face of the other is to leave them to their own feeling-education. For no feeling can be imposed without violating the integrity of the being that feels. On the contrary, art strives towards a love which consists in this, “that two solitudes protect and border and greet one another” (Rilke).

Artists direct themselves into their own unknowns, and the work of art can only direct us into our own. However, the mystery of the work of art is such that the truth it reveals to us, while so idiomatic and individuated, is nevertheless only true in that it is our truth. Artworks reveal a truth that can only be approached as “one’s own,” as “ours.” They ask us to turn towards them and to feel ourselves thereby – to feel ourselves feeling them/ourselves through them/ourselves. Art implies total participation (methexis). An “education” in feeling necessarily means feeling oneself more deeply, but through another, by way of otherness. To feel oneself other, to feel oneself differing from oneself, is feeling. Obviously, no artwork can accomplish that for us; it can only present the possibility. This possibility is the very opening of the artwork, as such. All that it exposes us to comes to null unless we expose ourselves to it, through it, and experience. 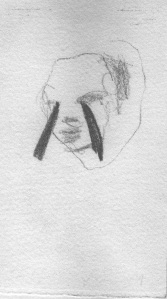 What makes the life or work (or lifework) of an artist pertinent throughout time is not what it gives us to comprehend about them or their work, but what they and their works do to us, what they call us to. What remains relevant for us, beyond all discursive understanding, are those lives and works which serve to educate our life, which teach us how to live more deeply – how to feel, act, think, and be. Perhaps they even expose us to lies we are telling ourselves. Perhaps they even forcefully rip down our walls and violate our complacent sensibilities. In any case, such a “teaching” no longer consists of adhering to certain tenets of belief, or to a litany of morals, codes, ideals, and duties. On the contrary, all teaching here is a matter of learning how to perceive (being) in the first place. The artist, through the work, seems to say, “This is how it has been for me to be; how is it for you, who share in it with me?” Art has no lesser ambitions than these: to expose us to the real vibrancy of life, to open us to its real possibilities (however nervous these make us), and to move us outside ourselves and our too-habitual ways of thinking, feeling, and being. A true work of art tears us apart. This is its careful work. The total work is the truth of the artist’s – our – being-torn.

What gives us to infinitely surpass ourselves and what we understand ourselves as, endures. To teach man what man is, is to teach man what exceeds him and makes him exceed himself. In that he might exceed himself at any point, and by any stimulus whatsoever in his world, the material for his art is limitless. But this “material” is never pre-given or pre-understood (not even as material!) and must itself be invented or discovered. To be put into relation with the whole of that material, as with the reality of being-exceeded, of being-more, endures most precious to us.

What lasts gives and breathes life, contacts us at our deepest point, where we have barely even emerged into being – where we have barely yet begun to speak, feel, sense, and think. Art is unique in teaching us this, that at no living point are we fully alive. Art reminds us: a fuller life awaits. A greater attestation to existence is in store for those who look. Art proves that man is not content with convention, and especially not with the convention which calls him “man.” Art proves that man wants more – not more things, possessions, powers, or truths, but simply more being, pleasure, relation. Man wants the widest reach, not to dominate, but to embrace; and that embrace always implies distance, which the differences in each specific art, artwork, and artist so clearly manifests. Man wants the infinite “more,” so obviously “outside” him, to be related to and felt “inside” himself, invisible, infinite. Which is simply another way of saying: he wants to feel differently. Art expresses this desire for infinite feeling and for infinite difference in feeling – not a production of differences, but difference itself as the feeling of feeling. The feeling of being as such – the vulnerable.

Only when man is taken outside of himself, surprised and exposed, is he. Art exposes (the) being(s) to itself (each other). And because, still being, we are never quite “fully exposed,” never quite revealed “in full,” even to ourselves, art lasts and continues to call us out.

*Note, 2017: The usage of the pronoun “he” throughout this text is a convention. “She” and “her” could have been substituted for every instance of “he” and “his.” Likewise, every mention of “man” refers to generic humanity. If there is reason to suspect that, besides these superficial markers, there is a gender-bias to anything I have said about art and artists here, I am happy to accept that feedback, have a discussion and learn.